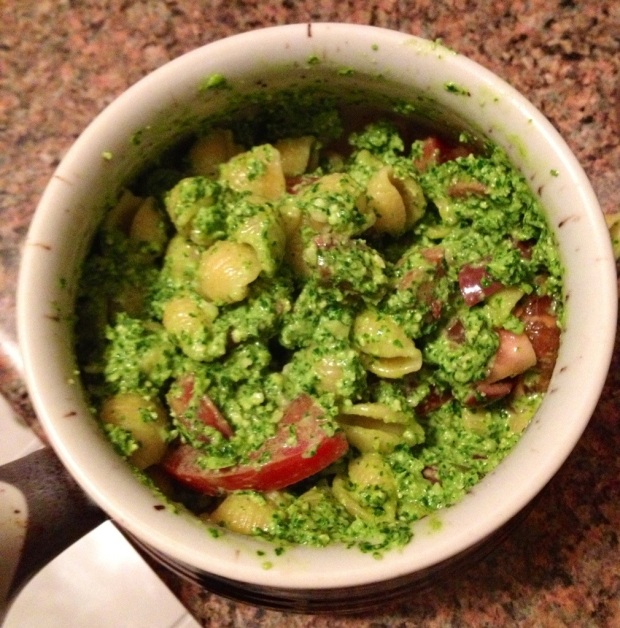 This recipe I got from the amazing Food 52. I had a bunch of basil left over from the delicious eggplant parm and so obviously thought of pesto, but then wanted something a little more veggie-heavy. My friend was coming over and I asked her to bring a green that we could throw in, and she bought kale – hence our recipe choice.

It’s pretty easy:
– Blanch the kale (I’m not sure this was necessary, but then we used the kale water to cook the pasta, so that worked out)
– Put the kale in the food processor (or a bowl and use your immersion blender!!) and add in the other ingredients:
– garlic
– lemon juice
(We soaked the garlic in the lemon juice, just to take the sting out – not sure if that works, but it makes me feel better!)
– pine nuts
– olive oil
– cheese (they called for Parmesan, we used goat cheese and this mild Parmesan-Swiss-like cheese that I forgot to check what it was before I threw out the package – sorry!)
– salt

And then we realized that the recipe didn’t call for basil! We put it in anyway, and I think it was a good call because it didn’t really taste like pesto until we did – just a kale blend.

We put it on quinoa pasta shells, and topped it with
– chorizo (an excellent addition to ANything)
– tomato, and
– kalamata olives

The result was a lighter-tasting pesto that you could eat copious amounts of with delicious quinoa pasta.

Side bar: I really still love my immersion blender, but I’ve definitely been using my cuisinart more since finally having space to keep it out! Also because I discovered that I have a flat top for it, instead of using the one with all the moving parts that then have to be meticulously cleaned. Anyway, apparently I was feeling a little guilty about all that so had to come clean. 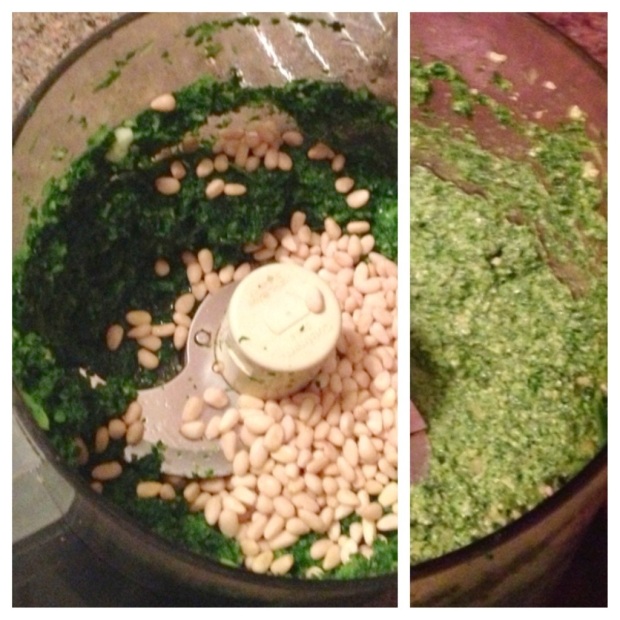