– Cut an eggplant in half and scoop out the inside and chop it up (or use multiple smaller eggplants if you want to make cute, individual portions) Set the shells aside

– Heat some olive oil in a heavy pan and sauté chopped eggplant with chopped garlic and onion until they start to soften (the more garlic the better on this one, I would say, I did about 4X as much as they called for)
– Add in half a red pepper, chopped
– Add in a bunch of ground meat.  I used the inside of 2 fresh sausages, and some ground beef.  The sausage was absolutely delicious, and the beef ended up being a little bland, so maybe spice it with something before you add it in.  (They say to do a mix of ground lamb or beef and pork, but since I only had pork sausage that’s what I used)

– Add in 2tbsp fresh oregano, cinnamon (they say 1.5tbsp.  I didn’t add in enough and couldn’t really tell it was there in the end, so can’t really weigh in on this one…) salt, pepper, and cayenne, and simmer until meat is browned ~5-10 minutes
– Mix in 1/3c toasted pine nuts (which I just “toasted” by making a hole in the middle of the stuff in the pan and letting them sit for a few minutes) and a chopped tomato

– Pile everything into the eggplant shells, sprinkle with almond meal (my parmesan alternative which is surprisingly effective!!) and bake on a parchment-lined sheet at 400*f for ~20-30 minutes, until heated through 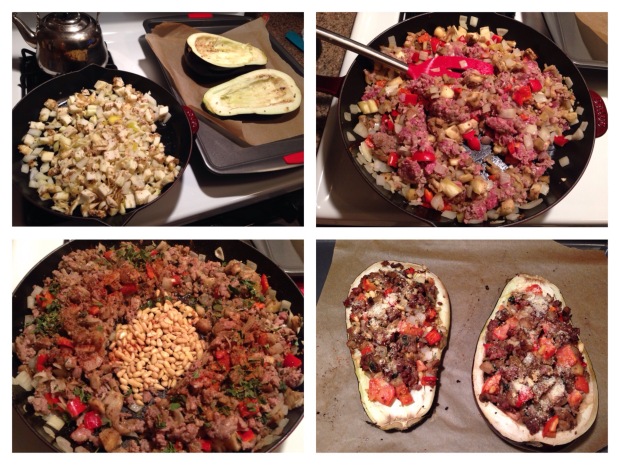