I was visiting my family in Phoenix (who you may remember from last year’s Lemon Raisin and Chocolate Orange Spongecake extravaganza) and this year we had a couple of other winners, including this one, which I got from Feasting at Home.  I had just posted the Stuffed Eggplant recipe, which they wanted us to make again, but instead we decided to stuff squash!

We followed the original recipe pretty closely – just cut down the maple syrup, omitted the onions, did turkey sausage instead of pork, and didn’t sprinkle with nutmeg because I didn’t read the top part of the recipe where they explain what to do with that (namely, sprinkle the cooked squash with it before you stuff them). Anyway, here’s how it went down:

– Cut acorn squash in half, scoop out seeds, coat the inside with equal parts of maple syrup and olive oil, sprinkle with salt and pepper, and bake skin-side-up at 400*f for ~30 minutes until soft

Meanwhile…
– Cook the sausage (they say 1c for 3 acorn squash, but we felt like that wasn’t enough so I would add more) and set aside
– Cook the parsnip (2, diced) in the sausage pan with olive oil for ~10 minutes (If you’re adding in onion, do that at this point as well)
– Add in 1 diced apple and 2tbsp chopped fresh sage (or more – this was delicious)
– Add in salt, pepper, a splash of white wine, chopped kale (one bunch, we used lacinato) and ~1/2c toasted pecans
– Add a little maple syrup, to taste, and then add back in the sausage 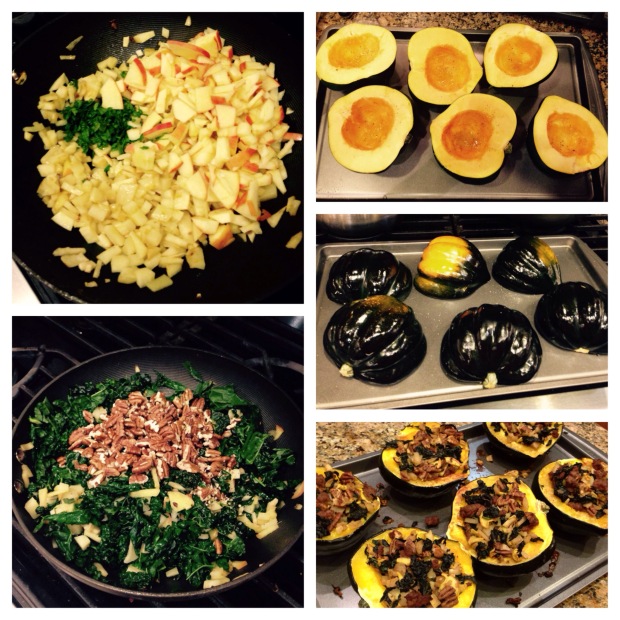 One thought on “Maple Acorn Squash with Sausage, Kale, Parsnip, Apple, and Sage”