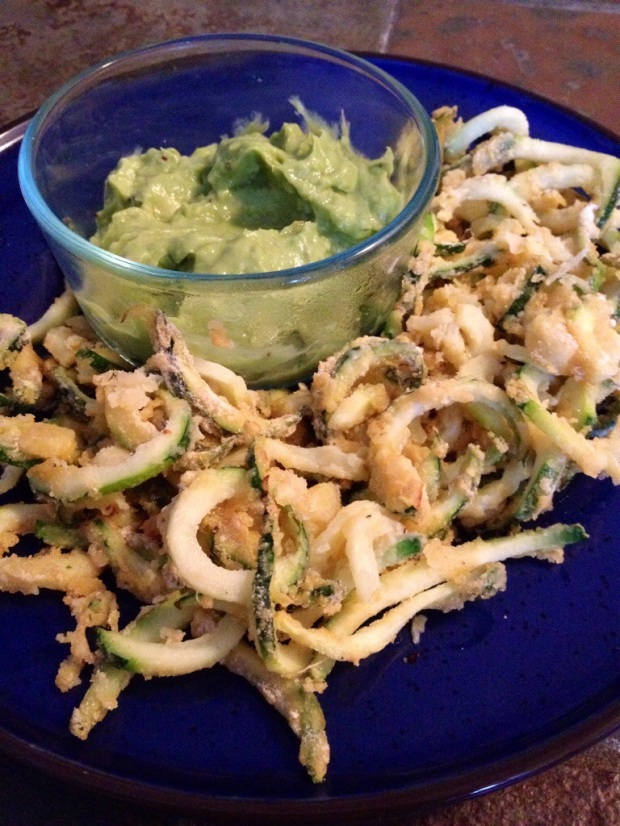 I have definitely let more than one zucchini die in my fridge while waiting for an inspiration to use it, but not so with this one! Ever since I accidentally used the curly-fry blade on my spiralizer when making pesto noodles I wanted to make zucchini curly fries – and why not today?

There were some definite misadventures along the way – I started following this recipe from Haphazard musings and creations which seemed to imply that I could just coat the zucchini spirals in oil, salt, and pepper, bake them at 450*f for a while, and that they’d magically become crispy and fry-like – not true! They sort of sautéed themselves into a wimpy (albeit delicious) mess

So next I tried coating them in egg and then chickpea flour with some salt and pepper, and broiling them for 10+ minutes, flipping them once or twice. This worked much better! Although I would definitely recommend seasoning your chickpea/egg batter well because they weren’t super flavorful. Also they were still pretty soft, so it was hard to dip them into the aioli I made (as my friend Aaron astutely commented, “Maybe there’s a reason they’re called ‘fries'”)

The aioli! Total success! I decided to make it with avocado because mayo is kind of sketchy, so I just blended avocado with:
– Lemon juice
– Garlic
– Red onion
– Salt and pepper
– The cores from the zucchini that are left after you spiral – thinned it out and also lightened the flavor a bit – definitely a good addition