I think stuffed eggplant is just a winter thing – and since winter seems to not want to quit… Here’s another one!!  I got this basic recipe from Food.com, and really it was just an excuse to use up everything I had left in my fridge from my move (which, yes, was almost a month ago – apologies for the delay – I know you were holding your breath!!) Here’s the basics:

– Cut an eggplant in half and scoop out the insides
– Chop up an onion and sauté in butter until softened and starting to brown
– Add in chopped eggplant guts, chopped sundried tomatoes (they say the kind in olive oil, but mine were just the regular produce-isle kind), thyme, and salt and pepper, and sauté until also starting to brown (If you’re following their directions, also add in basil at this time.) (If you’re following what I did, wait until the vegetables are browned and then add in half a jar of pesto which makes up for the basil part, and the lack of olive oil in the tomatoes, and adds in a bunch of other goodness)

– Spoon the mixture into the eggplant shells and cover with cheese (they say mozzerella, but I used romano, again because that’s what I had to use up – twas delicious)
– Put the eggplant in a shallow dish and pour in some boiling water (not sure exactly why they say to do this, but it worked out fine) and bake at 325*f for ~20 minutes 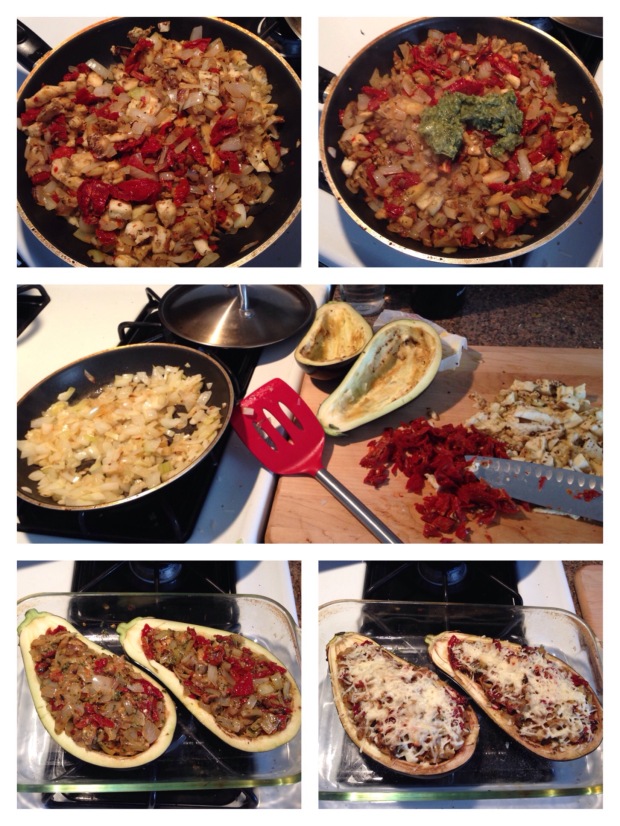 One thought on “Sundried Tomato and Pesto-stuffed Eggplant”