I wanted to make something with my new spiralizer that was rich and decadent enough where you wouldn’t wish it was grain-based pasta (kind of like my spaghetti squash with mushroom cream sauce which, if you haven’t tried it, is phenomenal!) I decided I would make a bastardized spaghetti a la carbonara, which I thought was pretty clever until I looked it up and realized that Mummy I Can Cook thought of it first. I more or less followed their recipe:

First, I spiralized my zucchini on the skinniest setting (if you don’t have a spiralizer you can just use a peeler to make ribbons, like Mummy did). I blanched the zucchini in boiling water for a minute or two and then drained it and put it back in the pan

Meanwhile, I chopped up a chicken chorizo sausage and fried it in a pan (they say to use bacon, but this is what I had, and it was delicious!)

I also whisked an egg and added in this soft white cheese that I had on hand, as well as some Parmesan, and some black pepper (I guess really you’re supposed to use Pecorino Romano for the cheese, but, again, this worked out deliciously) (also it’s supposed to be 1 egg and 1 egg yolk for 3 zucchini, and I just used one egg for one zucchini)

Then I mixed the egg-cheese mixture into the hot zucchini noodles, stirring fast so the egg formed a sauce, not a clumpy scramble, and then added in the sausage

Topped with more Parmesan, and voila!

A couple things I will say:
1) They say to add in some olive oil. I added in some grape seed oil, but I really don’t think either is necessary – it’s plenty creamy and whatnot without it
2) Make sure to drain the zucchini well!! They are nonchalant about it and so I only drained it a little, and my sauce turned out kind of watery 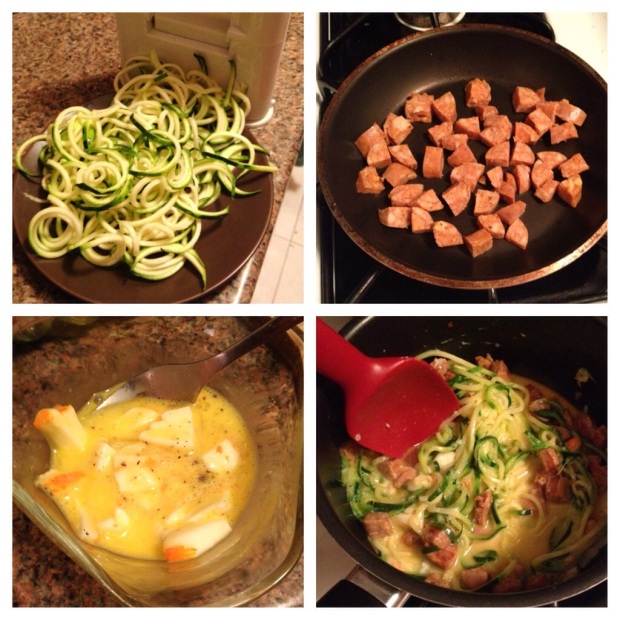 6 thoughts on “Zucchini a la Carbonara”