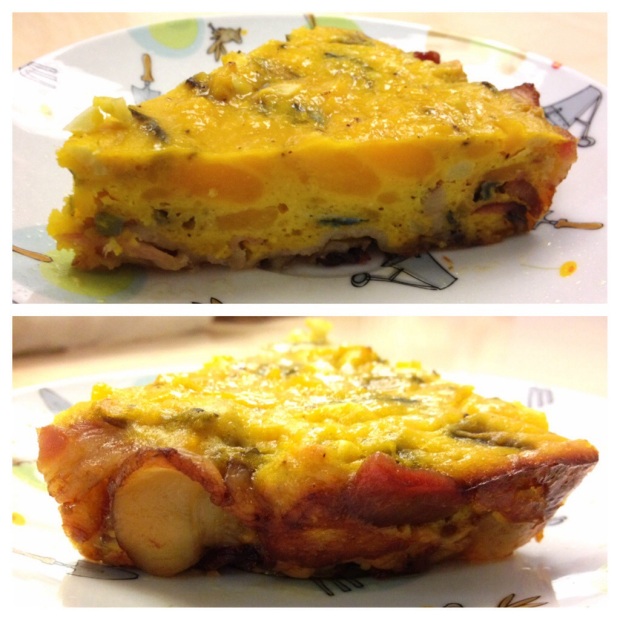 Making a crust out of bacon – what a brilliant idea! And perfect because I had just bought this “ends and pieces” thing of bacon from Trader Joes that is actually quite a lot of bacon, and not exactly pretty enough to serve to other people as part of breakfast, but perfect for this! And I also had this mystery squash half that I had tried to bring to a friend’s to use for dinner, but she rejected it and made me take it back home with me.

The first thing I did was roast the squash – seed it, poke the back, and put it cut-side down in some water in a pan in the oven at 350*f for probably about an hour – my thought was to soften it so I could mix it with egg for the quiche filling, but if it wasn’t totally cooked that would be ok too.

Then I made the bacon crust – which I got from this recipe from tgipaleo. They very briefly suggest that you lattice the bacon (and of course they were using real strips so that would be easier for them) but I definitely recommend that you do your best with this because it will make it keep it’s shape more in the pan. So:
– Lattice the bacon (and throw in extra to reinforce, and because it’s delicious and you have it and you don’t know what else you’d do with it)
– Bake the crust at 400*f for ~10 minutes
– Pour out the bacon grease (this is one of those times when it’s good to have a well-latticed crust so pieces don’t fall out when you’re pouring out the grease)
– Reshape the crust as best you can

Meanwhile, make the quiche filling: I couldn’t really find a quiche recipe that just called for eggs and squash, which is really all I had, so I decided to wing it.
– I chopped up a bunch of garlic (like maybe half a bulb!)
– Chopped up red onion
– Mixed those with the roasted squash with some salt, pepper, and some almond meal (that was an ingredient in the quiche that went with the bacon crust – I decided, why not?)
– Then I mixed in eggs – I only used 4, and although the bacon crust recipe said you can use coconut milk instead of regular milk, I omitted this because I was worried about there being too much liquid, and I thought it would be plenty creamy from the squash (See, Aunt Jan, Totally watching my cholesterol!) I will say that my squash-to-egg ratio made it a little less quiche-like, but everyone who tried it agreed that they would still call it quiche – so do with that what you will

– Pour the squash mixture into the bacon crust and bake at 350*f for ~45 minutes. Then serve, or reheat and serve the next day – both are valid 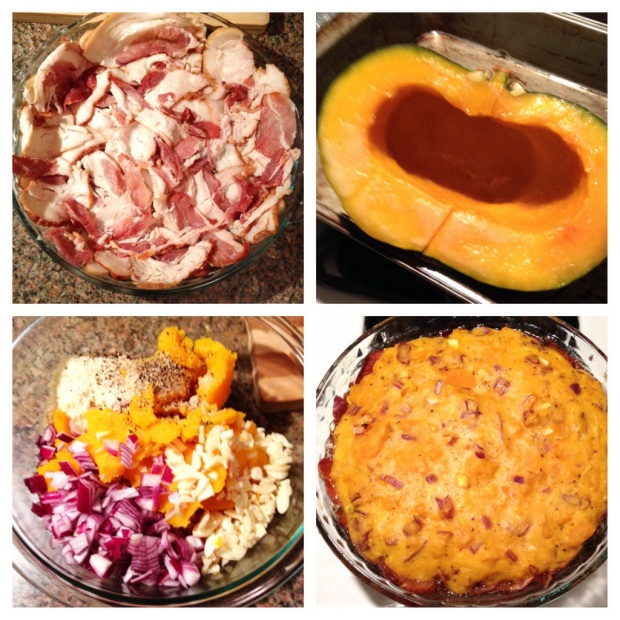 One thought on “Squash Quiche with Bacon Crust”