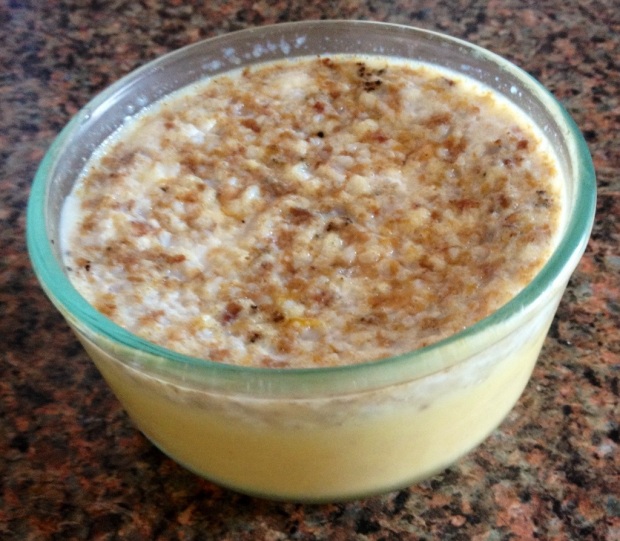 I was making bone broth with a massive bone that was full of marrow, and I wanted something fun to do with the marrow. Most people say to roast marrow and then do stuff, but of course this was boiled. The recipe from Melinda Lee I found is not for the faint-of-heart – probably literally – but my brand of eating would say it’s super good for you, and it’s pretty cool to make a savory custard, and it actually ended up tasting pretty good!

– Mix together:
— Bone marrow – I ended up with about an ounce, after a decent amount of it boiled out into my bone broth
— Eggs – I used 1 yolk and 1 whole. She says 2 yolks and 1 whole for 2oz of marrow
— Cream – I used about half a cup of coconut milk which actually worked out well! You couldn’t taste the coconut in the end result. Maybe this made it lighter? Or heavier? Not sure, do whatever suits you
— Salt and pepper

– Bake at 300*f until set. They say 20 minutes, but for me it took much longer (and to be honest I didn’t let it go long enough so I ended up having to turn it out into a pan to finish cooking!) so yeah – let it cook

This is pretty rich by itself, which is how we ate it. Melinda recommends serving it with meat. We also decided it would be good as the filling to a quiche or something. And you could add in some other quiche-like ingredients like veggies to sort of balance it out.