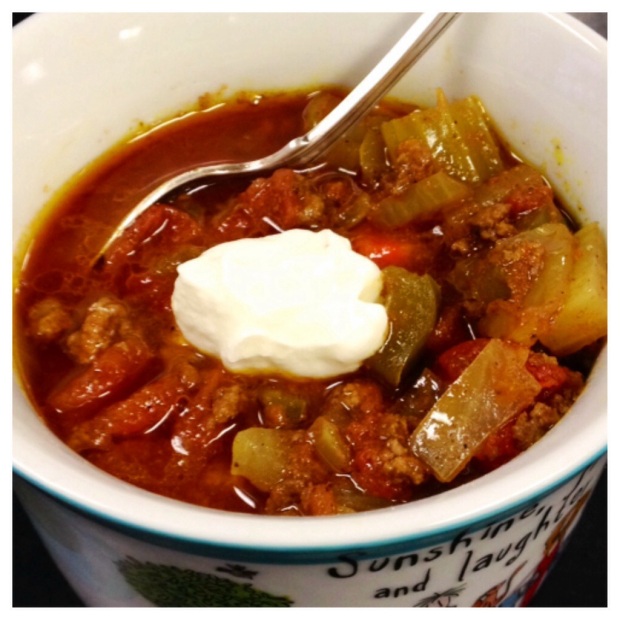 I got this all-natural, organic, ground beef from Trader Joes, and I wanted to make some beanless chili in my crockpot. I found a recipe from Rebooted Body which seemed to work…

– Brown the meat in a pan and then add it to the crockpot – they say to drain it first, but why would you deny yourself all that deliciousness? (Or go Cameron Diaz’s route and soak the fat up with white bread – yum!)
– Chop up all the veggies and add them to the crockpot, including:
— Celery
— Onion (I used a red one)
— Carrots – they don’t call for these but a friend said it helps in chili if there are no beans
— 2 seeded jalapeños – they call for a can of green chilis, but a different recipe I’d looked at called for jalapeño so that’s what I’d bought
— Green pepper – also called for by a different recipe
— Large can of diced tomatoes – they said crushed, whatever

– Add spices to the crockpot:
— Salt
— Turmeric
— A lot of cumin
— Black pepper – they say to add cayenne, but I was worried about how hot it would be with the jalapeños
— Paprika – they said chili powder, which I guess would be kind of important because that’s the name of the dish, but I didn’t have any and I couldn’t find any at the store!

– Cook in your crockpot – they say on high for 2hrs or low for 4hrs, but when I did this (high for 2) the vegetables were still totally crunchy. It tasted good, but as my artist friend Aaron said, it was “half chili”. He also said that traditionally one sautés the veggies before adding them to the pot, so that would be an option. Maybe the Rebooted folks wanted a chili where the vegetables weren’t totally dead? I guess that would make sense
– We added in a bunch of mulled red wine (yes, still leftover from the holiday party) and let it cook for another couple hours. By then Aaron deemed it was “3/4 chili,” and I deemed it totally delicious.

– Serve plain or with a dollop of yogurt or sour cream or cheese or whatever! 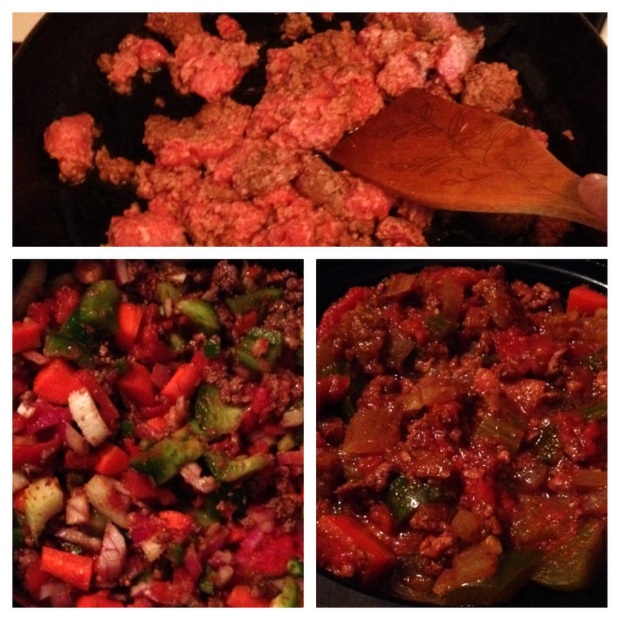