I don’t know about you all, but I have been eating a lot of crap this holiday season, and I wanted to make something with a lot of vegetables to sort of cleanse my palate (and then go gorge on Cuban food for Xmas eve – no big deal). This soup from Food Republic was just the thing:

– First thing I had to do was defrost some chicken stock. I’m not sure how much I used – they say 1qt. I bet I did closer to 1 1/2 or 2, and it turned out fine. (If you use veggie broth at this stage – which is actually what they call for – then this whole thing ends up vegan)

(Note: If you’re not defrosting broth, you can just use your soup pot for this whole part. I used my big cast iron skillet)
– Melt some coconut oil and add in:
— Chopped onion
— Chopped carrot (they say 1 carrot, I used 2)
— Chopped celery (they say 1 stick, I used ~3) (Part of the reason for these increases is that later they say to add in a potato, which I decided not to do, so I wanted extra veggies. Also because of how much broth I was using)
– They just have you cook these until soft. If I had it to do again, I would have started with the onions and caramelized them a little bit before adding the other veggies

– Add the softened veggies to the broth, along with
— 2/3head of cauliflower, roughly chopped
— 1 bay leaf
— Thyme (I think they were using fresh, which I’m sure would have been better than my dried stuff. Also someone I used to know used to rail against the laziness of professional chefs when they made dishes with dried herbs. I know that’s not directly pertinent to me, but I do aspire to have an herb garden someday! Damn you New York!)

– Chop up the remaining cauliflower into little florets, toss them with oil – I used grape seed oil because my coconut oil was in too much of a solid state. They say veggie oil, but that stuff is gross. Maybe use olive if you don’t have something else
– Toss the oiled florets with a heavy teaspoon of cumin
– Roast at 400-425*f for ~12-15 minutes (the reason for the range is that I read wrong and did it at 400 for 12 minutes and then realized that it should have been 425 so did that for a couple minutes. Turned out fine)

Back to the soup:
– The recipe says to add a couple tablespoons of milk to the soup. I, naturally, was going to use cream. But when I opened it, my cream had turned to butter! I was thinking of trying to add in something else – like cheese or yogurt, but I decided to try leaving it out, and it totally worked. The soup was still creamy and delicious. So I say leave it out on purpose!

– Add a bunch of arugula to your soup and use an immersion blender to combine it. (Remember to remove the bay leaf first. They don’t say you have to, but I don’t know – it just weirds me out a bit) They say to strain the soup afterwards so it’s smoother, but if you blend it for long enough it will be smooth.
– Also add in salt and pepper at this stage, if not before or throughout. They don’t call for salt at all!

– Put the soup into bowls and sprinkle the roasted cauliflower florets on top
– Sprinkle with paprika – adds deliciousness and a little of the holiday spirit! 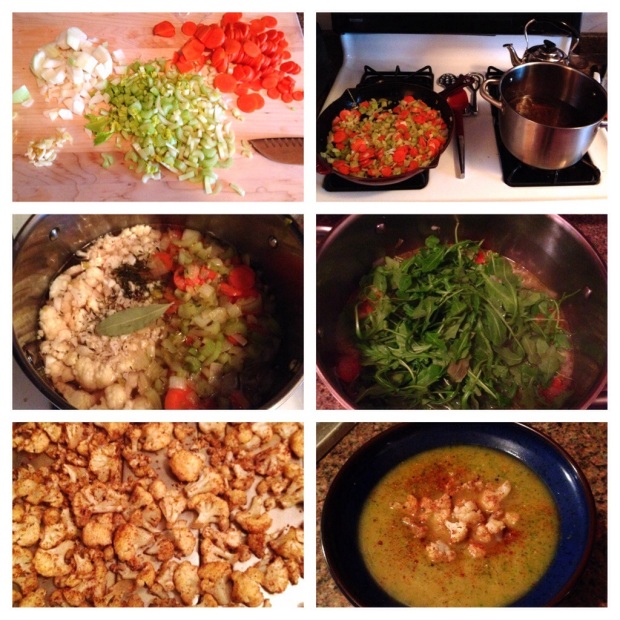 One thought on “Double Cauliflower and Arugula Soup”