I was having this game night, and the snack theme was spicy-sweet (yup, I’m a dork, but it was a co-dork effort, so not entirely my fault). In my quest I found recipes for cookies, brownies, nuts, and cayenne-chocolate-covered strawberries (which I will totally have to make sometime). And then I found a recipe for spicy sweet bacon chips – look no further!!

I found this recipe on Gojee from TasteFood where you cut the bacon into 2-inch pieces, dredge it in brown sugar, sprinkle it with a mixture of cinnamon and cayenne, and bake it at 350*f for ~15 min, flipping once. Then put it on parchment paper to cool.

I followed that pretty well, except that I used coconut sugar instead of brown sugar (I have no idea how it impacted the result because they didn’t taste coconutty, and they did taste delicious). And I also decided to add cocoa powder to about half of them. This was inspired! I think those without the cocoa are more versatile, like you could probably pair it with more toppings and dips, but the chocolate ones are so good you will probably just want to eat them plain. But don’t use too much cocoa because it can drown out the spice. 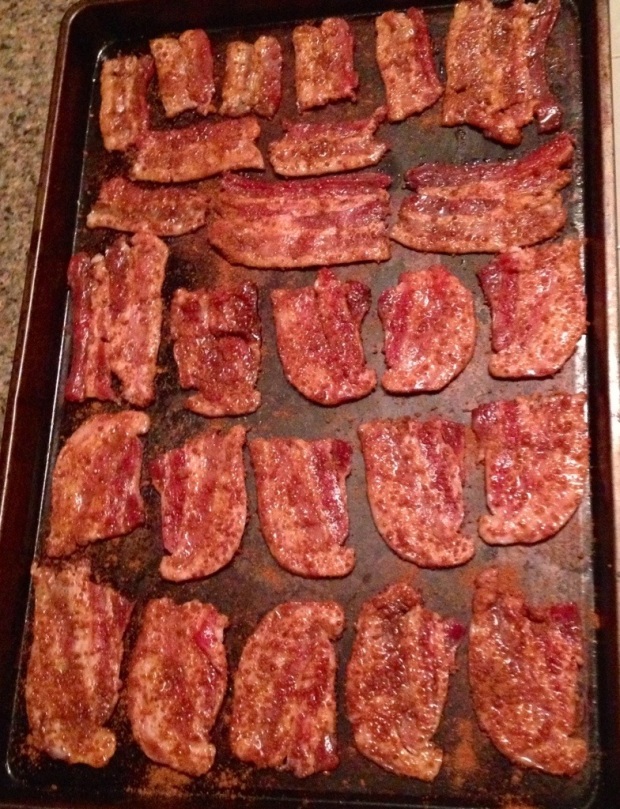