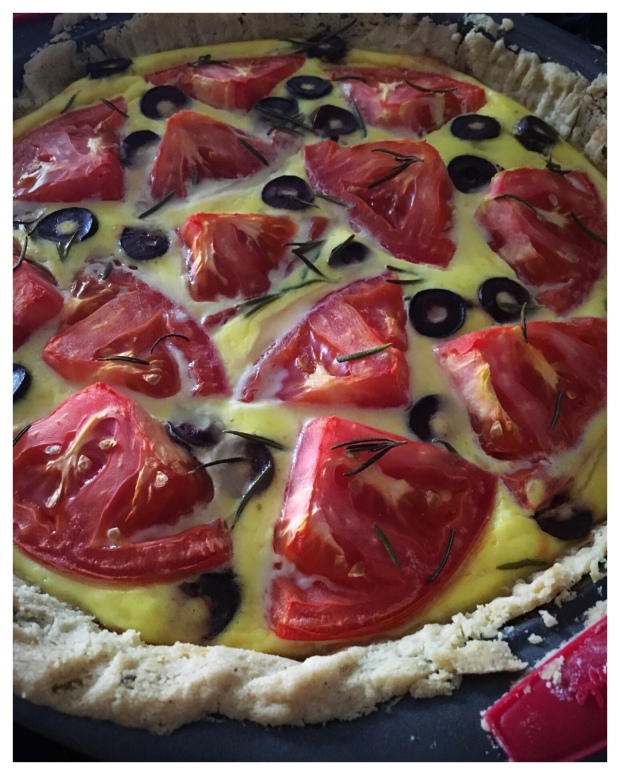 Last night my friends had a pot luck to research and discuss the many people and measures on the Oakland ballot so that we would be ready for Tuesday. I decided I wanted to bring some sort of savory GF tart, and this one from Nutrizonia caught my eye – largely because it claimed to be easy – which it basically was, but I would recommend using your favorite tart shell recipe and just following this for the filling. But here’s what I did:

In a food processor or by hand, combine:
– 1c gf flour
– 8 tbsp butter (I might have been a little shy)
– black pepper
Add in a little ice water at a time until it forms a dough (for me this took ~2tbsp)

Now the directions get hazy…. they say to put the dough in the freezer for 15 minutes, but it’s unclear whether this is before or after you put it in the pie tin. I ended up doing both?

Then make the filling

Combine (…in the same, unwashed food processor bowl, if you’re like me)
– 1c ricotta
– 2 eggs
– 1c parmesan (add this once you’ve mixed the other 2)
They don’t say this, but I would also add salt and pepper!

Pour the cheese mixture into the cooled tart shell.

Top with:
– Tomatoes – they seemed to use 4 small tomatoes and cut them just in half. I used 2 large ones and cut them into 8ths
– Sliced black olives (I used kalamata)
– Rosemary
(Note: Feedback from my voting friends was that there could have been more olives and more rosemary, so don’t skimp!)