I had made this delicious and nutritious chicken stock by just putting bones with meat into my slow cooker on low for 24hrs with a splash of apple cider vinegar to kind of get a hybrid stock/bone broth. I had also become pretty sick of eating eggs in the traditional way, and I remembered my dad would always make egg drop soup which I hated as a kid, but I thought I might like it as an adult. I was right! This was delicious, and perfect for when the warm weekend was just a tease and we’re back down in the 20s – awesome.

I found this recipe from Gimme Some Oven and then did the following:

– Put the chicken broth in a pot on the stove and add in:
— Thinly sliced shallot – really thinly sliced as they won’t have much of a chance to cook (they actually say scallions but I didn’t have any)
— Powdered ginger
— Thinly sliced garlic (they said powdered here too, but I’m trying to get over a cold, and why not?)
— Red pepper flakes (my addition)
— (They say cornstarch, or I guess some other thickener, but I skipped this part and it was fine)
– Bring all that to a boil, and the remove it from heat

– Have the eggs already prepared – basically just beaten. They say a mix of whole eggs and egg whites, I’m not sure why, but I just did whole eggs with a little water to thin them

– Constantly stirring the hot broth with a fork or something, pour in a thin stream of egg
– Stir in some toasted sesame oil – crucial, this really makes the dish. Although I suppose you could experiment with other flavorful oils. Hazelnut? They say 1/2tsp for 4c of stock, but I say 1/2tsp per bowl!
– Salt and pepper to taste
– Garnish with parsley or something else green 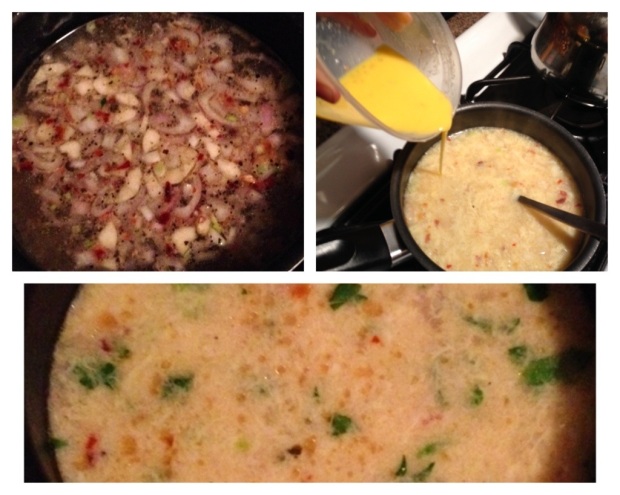