I tried making these 3 times, which is quite a commitment coming from me, but I have such a weakness for York Peppermint Patties, and this recipe had been sitting on my Pinterest Inspiration board since before NoSugar November! The 3 attempts achieved varying levels of success, but I really can’t try again because when something’s not good enough to share then I end up eating it all myself (except for one batch of these which was so bad I just tossed it). But maybe you can learn from my missteps and make good ones!! And if you do please let me know – maybe after the memory has healed I will try again.

The original recipe came from Oh Nuts. They say to:

– Mix together until it forms a play-doh-like dough (adding more sugar as necessary)
— 2+c powdered sugar
— 2tbsp butter
— 2tbsp cream
— 2tsp peppermint extract
– Form the dough into a log and refrigerate for ~45 minutes
– Slice the log into medallions and dip the medallions into melted chocolate
– Put back in the refrigerator on waxed paper to harden
– Done!! So easy!! Only don’t do what I did…:

Batch 1:
I wanted to use coconut sugar, so I ground it up in my coffee grinder. This worked, but the color was super off so I couldn’t really give them as gifts. Also the 2tsp of peppermint that the recipe calls for is a lot! And so I would recommend measuring it – I didn’t and my patties ended up not minty enough. And because of the coconut sugar they tasted a little molassesy or something. They were still good, and the texture was good, but definitely not give-away worthy.

Batch 2:
I decided to use white sugar and enough peppermint, so the end result looked pretty, but that whole “leave the log in the fridge for 45 minutes” part … I actually left it in for several days. When I tried to cut the log into medallions they were super crumbly. And when I was able to make a few medallions, the texture was pretty terrible. This was the batch that I tossed. But on the plus side, during this batch I figured out that you can just put a smaller pot in a bigger pot to make a double-boiler! So that’s exciting.

Batch 3:
I wanted to try again and see if the extra long fridge time was my only problem, or if it was because my coffee grinder wasn’t making my sugar fine enough (because I had ground regular white sugar instead of bought powdered – really just because I had regular on hand) or if it was because I didn’t mix the dough long enough for the sugar to really combine with the cream and butter. But this time I only made a half-recipe, just in case. These ones were way better, but still a little gritty so I think maybe it was the sugar. Anyway, sorry friends who I was going to give these too – you don’t know who you are, but I’ll figure out something else. 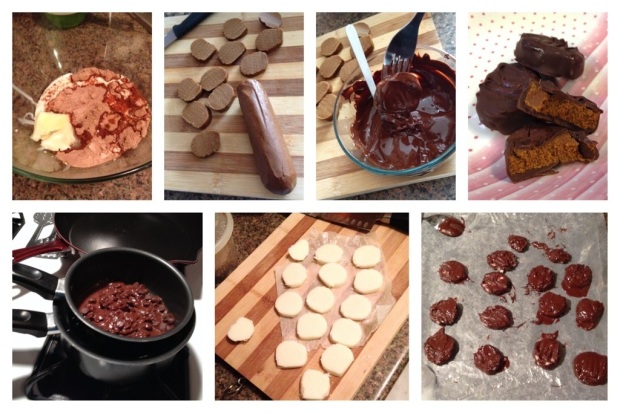