I wanted to make a stuffed squash, and after I found this recipe from Vegan Yack Attack for pizza-stuffed squash I was pretty uninterested in anything else. And one of the exciting things about this recipe is that it wasn’t trying to fake regular pizza (and, at least the way that I made it it didn’t end up resembling pizza much), but it’s its own thing. (Although my version is decidedly not vegan)

– Cut the spaghetti squash in half the long way and scoop out the seeds (Side note – I used my tomato knife to cut the squash – those things are amazing!!)
– Place the squash cut-side down on a baking pan, put ~1/4 inch of water in the pan, stab the squash a few times, and bake at 375*f for ~45 minutes

– Assemble the pizza toppings:
– Brown sausage and mushrooms in a pan
– Add in diced tomatoes and peppers (they say to add tomato paste but I didn’t want to because it’s so sugary – but this may be one of those things you should add if you really want it to taste pizza-like)
– Add in red pepper flakes, herb like basil and thyme, and any other seasonings
– I also added in the white-wine deglaze from my turkey burgers, just to give it a bit more je-ne-sais-quoi

– Once the squash is done, scrape out all the spaghetti, leaving the shells intact (this is super fun! Mom, you should reconsider your aversion to spaghetti squash if for this reason alone!)
– Mix the squash in with the toppings mixture
– Add in cheese – I did a mix of white cheddar and jack
– Pile the topping mixture into the squash shells and top with more cheese
– Put back in the oven for another ~20 minutes until it’s a little brown on top 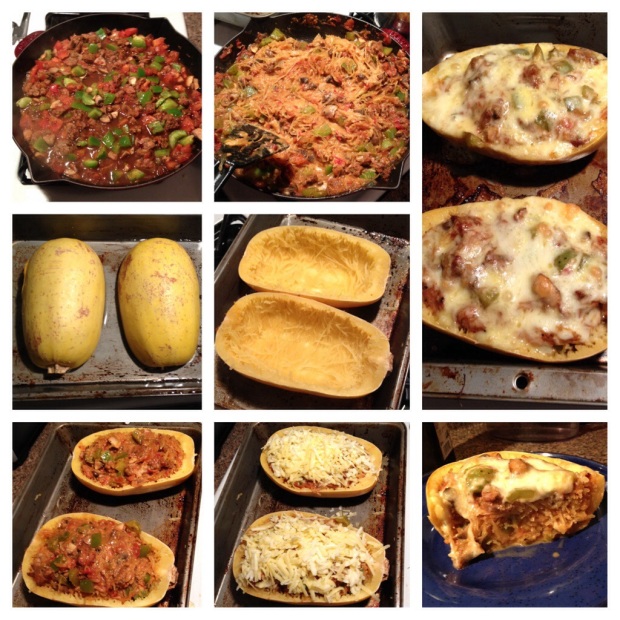 One thought on “Spaghetti Squash Deep-Dish”