I had carrots, parsnips, and celery wilting in my fridge, as well as half a thing of diced canned tomatoes (transferred to a jar) leftover from the harvest curry. Soup time! Dead vegetables are perfect for soup because you want them to be soft anyway, so making the soup takes less time. I found a recipe from Cooking with Corey, and then did the following:

– Sautéd chopped onions, carrots, and parsnips in olive oil until soft. I also put in a bay leaf at this point as they say to do, but since mine was dry I probably should have waited on that. And I put in chopped garlic at this point, even though I think I was supposed to wait on that. (They also say to add leaks, but I didn’t have any)

– Poured in some red wine – I used whatever I had in a jar in my fridge, they said Malbec. Then let they all cook for a bit.

Added in the rest of the ingredients:
– Diced, canned tomatoes (they said tomato paste – no thanks)
– Bone broth (they just said water, but why not make it a bit healthier?)
– I added a little bit of water too, just so it was all well covered.
– Herbs and spices – they called for fresh herbs, too bad for me. I used:
— Salt
— Paprika
— Thyme
— Basil
— Coriander
– Celery, which I forgot to add in during the first stage, even though it was sitting on my counter. I just cut it thin and added it later, assuming it would cook enough. It did – up to you.

– Then let it cook for ~20 min, and then done! You can sprinkle some cheese on top if you’re so inclined. 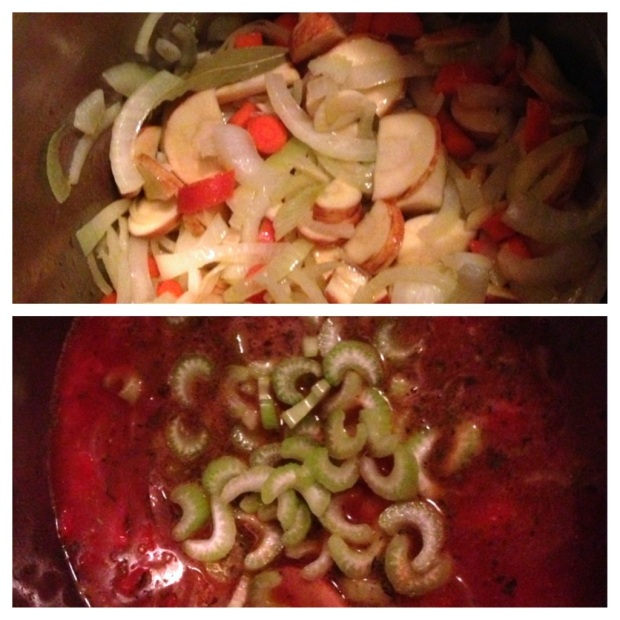