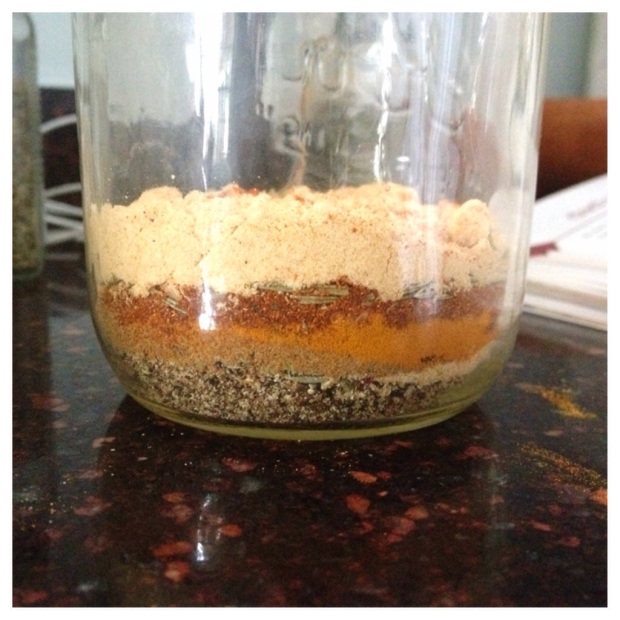 Pretty! Until you shake it up – then it’s just sort of an orange-brown color. But a delicious addition to probably any grilled or baked protein! We used it on pork short ribs (post coming next). This one was also from Paleo Comfort Foods. We reduced the numbers in our version so we wouldn’t have much extra, and came out with this:

– 1tbsp of each of the following:
— Thyme
— Ground pepper
— Salt (note – in the original they had twice this much but I read it wrong, and it worked out ok)
— Onion powder
— Cumin
— Turmeric
— Dried minced garlic
— Paprika
— Chili powder
— Rosemary (they say cracked rosemary, which I took to mean I should crush up the leaves a little before adding)
– 2tbsp of mustard powder
– (They also say 2tbsp of something we didn’t have called California seasoned pepper)
– A pinch or to taste of cayenne (according to their ratio it should be 1tbsp, but we had some sensitive palates)

Shake it up, rub it on or add it to whatever you want!

A note: This is my 300th post on Chameleon Kitchen!! And I meant to arrange it so it would be tomorrow’s ribs, which is a bit more impressive, but I think this spice rub deserves to stand by itself, so here we are! Thank you to everyone reading this for your support in helping me reach this milestone!!