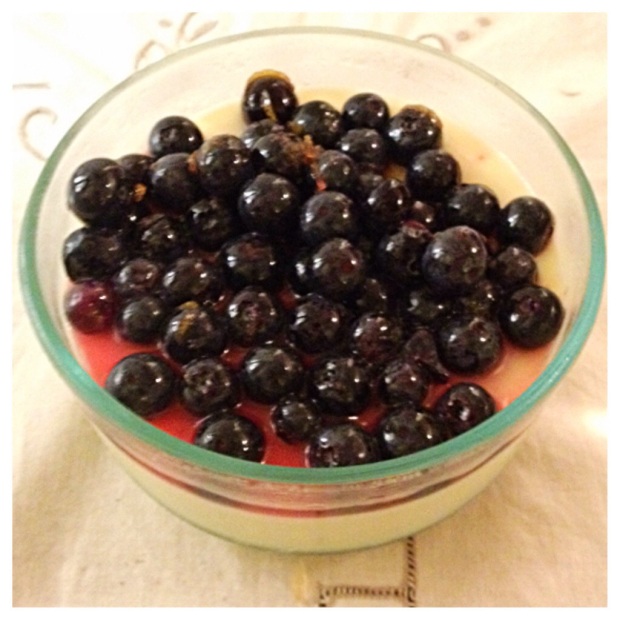 I always used to confuse panna cotta with panettone – that horrible-looking fruitcake bread that’s always on display in grocery stores around the holidays (is it good? Maybe it’s one of those judging a book things) Anyway, as a result I’d stayed away. Until I think I ended up at some sort of prix fixe situation where panna cotta was the only dessert option, and I realized my horrible mistake!

Eating it – totally different from making it: I saw this panna cotta recipe in my Food and Wine magazine and amazingly had almost everything I needed – I had corn and gelatin and whole milk and white and brown sugars and salt. All I needed was cream and lemon and blueberries! Done.

– First, husk and steam the corn for ~15 minutes. I’m actually curious if you couldn’t just leave it raw – next time! While that’s steaming…
– Sprinkle 1/2c milk with ~1/2tsp gelatin (you know how I am with measuring – and surprisingly that was not an issue) and let sit
– On the stove, heat and stir frequently until it just starts to simmer:
— Another ~1/2c milk
— 1c cream (you’re actually supposed to do a little more than that, but I just used a little half pint thing, and in the end I felt like the dessert was a little too cream-y, like it leaves a little creamy film in your mouth, if you know what I mean, so I would use 3/4c cream or less next time…)
— 1/4c+ white sugar (all the measurements in the original recipe are weird amounts, like this one is technically 1/4c + 2tbsp)
— 3tbsp brown sugar
— 1/4tsp+ salt
– Pour the just-simmering milk mixture over the gelatin mixture and stir until smooth

– Cut the corn kernels off the cob (using your corn stripper if you have one – one of my favorites!) and then blend them up in your food processor
– Pour the warm milk-gelatin mixture into the food processor and blend it all up together
– Pour the whole thing through a sieve to separate out the solids (they say to do this twice: the first time push on the solids to get all the moisture out, and the second time don’t push on the solids, just discard whatever doesn’t go through on its own. I followed these instructions and the texture in the end was great, so I would recommend it)

– Let the mixture sit in an ice bath until cool, stirring occasionally
– Pour the mixture into ramekins or whatever you want to serve the final product in (for me that was a Pyrex…), cover, and put in the fridge overnight to set

– To make the blueberry compote, mix together
— Blueberries (I used most of a pint)
— Lemon juice (about half a lemon)
— Lemon zest (from the whole lemon)
— Sugar ~ 1tbsp
— Salt
– Let sit for at least half an hour, stirring occasionally
– Spoon on top of lovely, solidified, creamy, smooth, delicious panna cotta
– Serve!

A note: the delicate flavor of the sweet corn is kind of overwhelmed by the blueberry compote. It’s still super delicious, but don’t go crazy with the amount of blueberries you serve with because the panna cotta plain is really nice too (and some partakers preferred it that way)