Well, I’ve been struck with it again – a winter cold, or maybe the flu, not sure, but definitely sure about the winter part. But this soup helped! I was looking for some sort of garlicky chicken soup, thinking I had chicken stock in my freezer when it was actually beef bone broth. But this recipe from macrobiotic.about totally worked, and you could do it with a veggie stock if you’re into that.

– Heat oil in a pan (or directly in a soup pot if your stock is defrosted – mine was not) I use coconut oil
– Sauté chopped onions for a bit until they’re getting soft
– Add in chopped garlic, celery, carrots, and ginger, and sauté for a little longer (they actually to sauté all of that with the onions, except the ginger which they say to save until the next step, but I really think onion should at least start to cook first, and why not add the ginger in?)
– Add in the stock with tamari, thyme, and red pepper flakes (they say cayenne but I really can’t find mine – I should just buy more) and let simmer for ~20 min. I also added in whole peppercorns, which I would not suggest as they don’t get blended or strained out later, and are quite jarring when they end up in a spoonful.

Just a note that when I did this the veggies tasted awesome on the first day, and like mush every day after that. I would perhaps suggest undercooking them a bit to account for this.

– Add in greens. They suggest bok choy, but all I had was the messy tops from my beets. This was actually a perfect use for them because they’re not pretty, but they are quite nutritious (same plant as chard – everyone knows this?) I just pulled out the bright stems because I thought they might make the soup a weird color – something I’m generally unconcerned with, so I’m not sure what was going on. (This would also be the time to add in any precooked meat, as they suggest, but which I didn’t do)
– As an added boost to the cold-killing, chop up some raw garlic and add it into you soup bowl with the freshly-ladled soup. Raw garlic is so good for you but so tough to take, and the hot soup softens it just enough 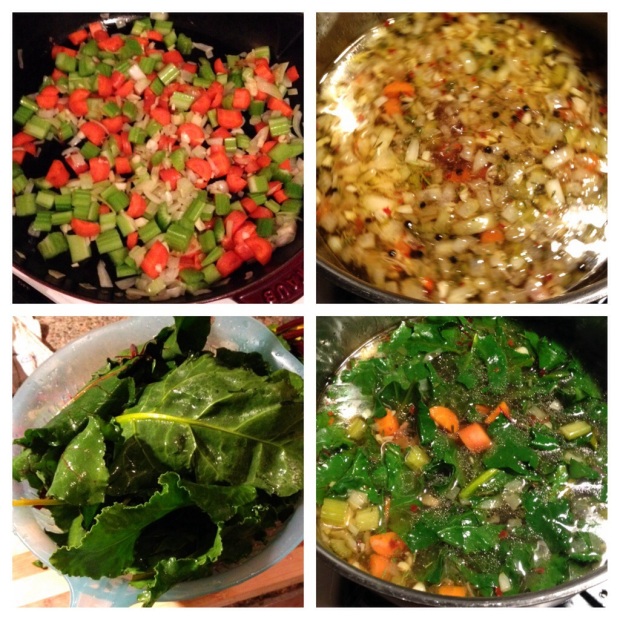