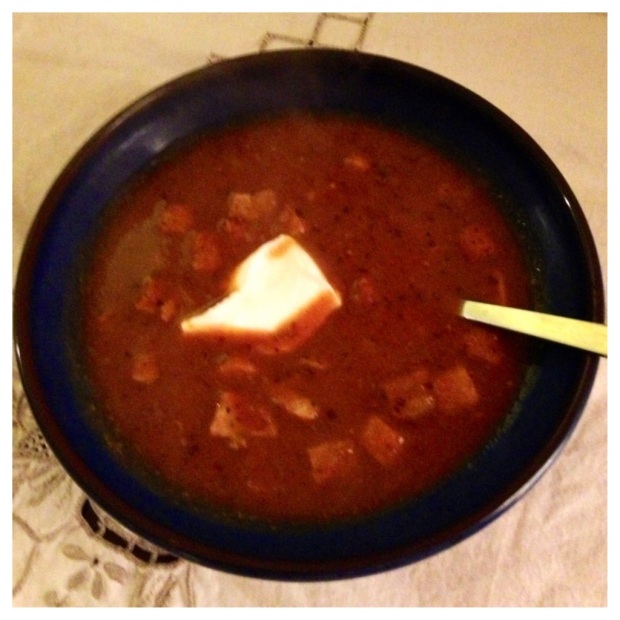 This soup was super easy and delicious, and perfect for when it’s cold out and you’re just feeling tired. I got the original recipe from Smitten Kitchen, and here’s how it went down:

Add in and immersion blend:
– 1 can black beans
– 1 can diced tomatoes
(Smitten says to blend these first, but that just seemed like extra dishes to me)

Add in and simmer for ~20-30 minutes:
– 1 can pumpkin
– 2-3 cans equivalent of chicken stock or some other stock
– Splash of leftover mulled wine from your holiday party (or really anything. Smitten calls for sherry, which I’m sure would be delicious)

Just before the end, add in:
– Chopped chicken-apple sausage (or Smitten says ham, and everyone who left comments on her recipe said a million other things. I chose chicken-apple sausage because it’s smokey and sweet, which seemed like it would go well, and it did)
– Splash of apple cider vinegar (or some kind of vinegar – Smitten uses sherry vinegar, which again sounds delicious)

Serve with:
– More salt and pepper
– A dollop of Greek yogurt (or Smitten says sour cream, but I never consume enough of that to justify buying it. I bet ricotta would be delicious too!)
– (Other garnishes that I didn’t use but think would be awesome:
— Toasted pumpkin seeds – recommended by Smitten, but I forgot to pick up some
— Some sort of oil drizzled on top. Maybe red pepper, or something with a little kick, or even just a good olive oil)