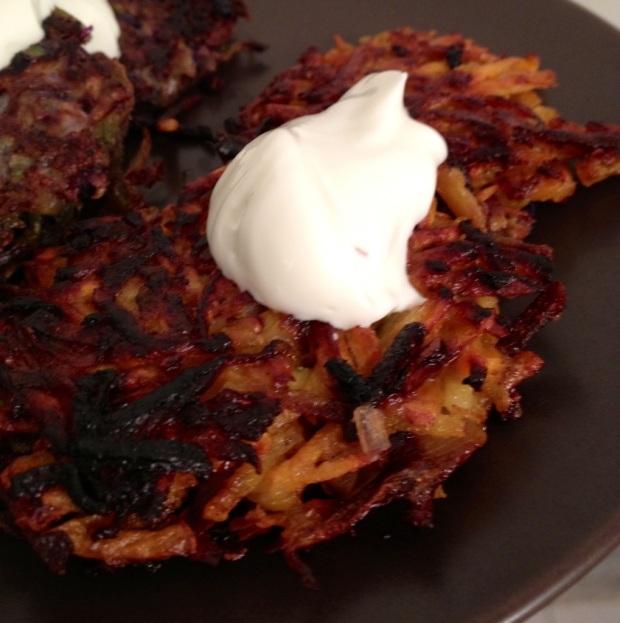 It’s Hannukah party time! And of course I didn’t want to make boring latkes, so I made these ones from Whole Foods. They operate pretty similarly to regular potato latkes, just slightly different ingredients:

– Grate:
— 2 sweet potatoes
— 1 pear – mine wasn’t super ripe so it wasn’t that flavorful but it was still good
— 2 shallots (they said onion but the store didn’t have any – isn’t NYC supposed to be where I can find anything??)
– Squeeze these guys out in a kitchen rag (or paper towels will do in a pinch)

– Mix it all together and fry in large spoonfuls on a medium-hot skillet or whatever with ~1/8in oil in the bottom. We used a combination of:
— Grape seed (for ability to handle heat)
— Olive (for cost factors)

Tips:
– Use a food processor for the grating part if you have one – totally worth having to clean it afterwards!
– Keep replenishing the oil – also worth it. This holiday is all about oil, don’t skimp.
– Add more egg or flour or whatever if you feel like you need to, we’re not making hash browns (at least not on purpose)
– Larger latkes seemed to hang together better than small ones for some reason.
– Serve with sour cream – yum!!

One thought on “Pear and Sweet Potato Latkes”