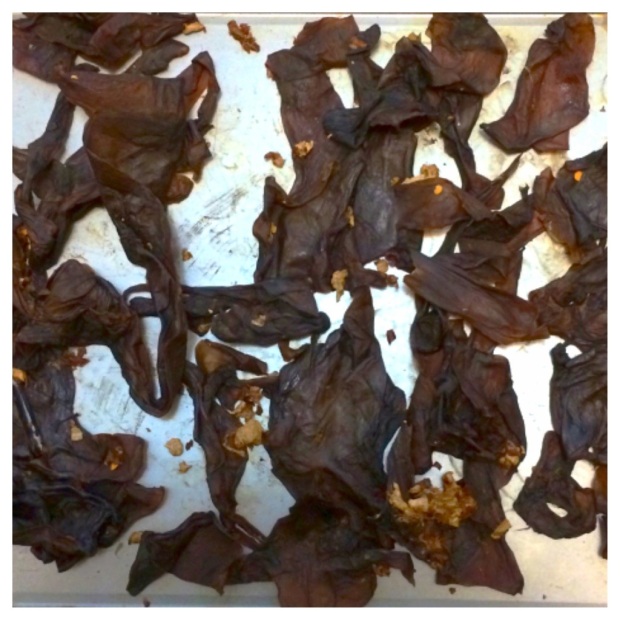 This isn’t technically a guest post because I’m writing it, but the material for this rather out-there post comes to us via the incredibly talented musician Carey Clayton (who maybe after I post this will actually read my blog???)

If you make a lot of kombucha you end up with a bunch of scobies (the solid, mushroom-like things that form during each batch that cause/are the result of fermentation). Throwing them out really feels awful because they’re massive and also because there’s so much good stuff in them. So why not find another way to use them? Here are the finer points:

– Inspiration recipe from Holistic Squid
– Cut up the scoby layers into strips that look kind of like Pad See Ew (but unfortunately don’t taste like it)
– Dehydrate at ~100*f for ~8 hours to get out some of the moisture so they’ll absorb more of the marinade. (This can be done by barely turning on the oven, well below the 200* mark – you should be able to touch the pan with your hand no problem)
– Marinade in tamari, garlic, and ginger
– Dehydrate again for ~8 hours
– Enjoy!

The jerky is super chewy but pretty delicious! Also super good for you because of all the probiotics that hopefully aren’t killed during the process.