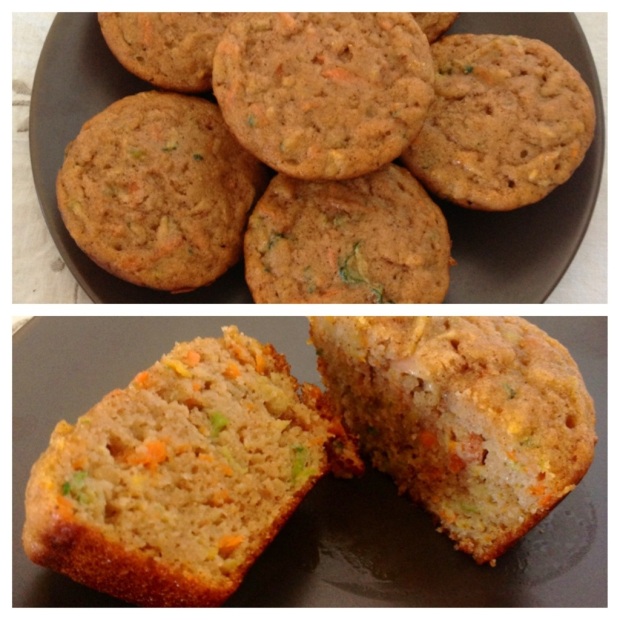 I have to go out of town for work for a whole week, and so I wanted to make something to bring with, aside from trail mix or whatever. So what about muffins? I was going to make plain coconut flour muffins, but then I found a recipe that included zucchini and carrots from The Well Fed Homestead which sounded even better!

Some issues:
– They call for a total of 2 cups of grated zucchini and carrot. I had a part of a carrot and a little zucchini and a summer squash, so I grated those, and then added in half an apple. It was probably more like 3 cups, at the end of the day. And I’m pretty convinced that there are any number of combinations of veggies that would work. I think next time I would use beet, and then it would really look like confetti! But any squash, and any mild or sweet root vegetable.

– I only had 5 eggs and they called for 6. Well, the recipe only called for 1/2c coconut flour, whereas some recipes that call for 6 eggs require 3/4c coconut flour, so I wasn’t worried about that. I just added a pinch more baking soda, just in case.

– I added in nutmeg because a friend of mine said that there are few things that aren’t improved with nutmeg. So far I agree.

– I meant to add in walnuts, but got side-tracked at the wrong moment. I still think this would have been a good idea.

– I followed their recommendation of using 1/2c honey, but I shouldn’t have because I like things less sweet, (and especially because these are supposed to be road snacks and I’m still addicted to York peppermint patties).

A tangent:
Everyone acts like baking is so precise and you can’t play around with it like you can with cooking because if you don’t follow recipes exactly they won’t work. But really, in most cases, it will still work – it will just be different. Which is the same as with all cooking. We’re not exactly making a soufflé, here, and even then a botched soufflé is just flat, right? (I don’t actually know but I’m assuming). So, whatever. Don’t limit yourself! Inspirational talk!

Mix the wet, add in the dry, mix well (possibly with the wisk attachment of your amazing new immersion blender??), add in the shredded stuff.

They’re really good, and really pretty! Also I bet if you tell kids they’re filled with sprinkles they’ll believe you. 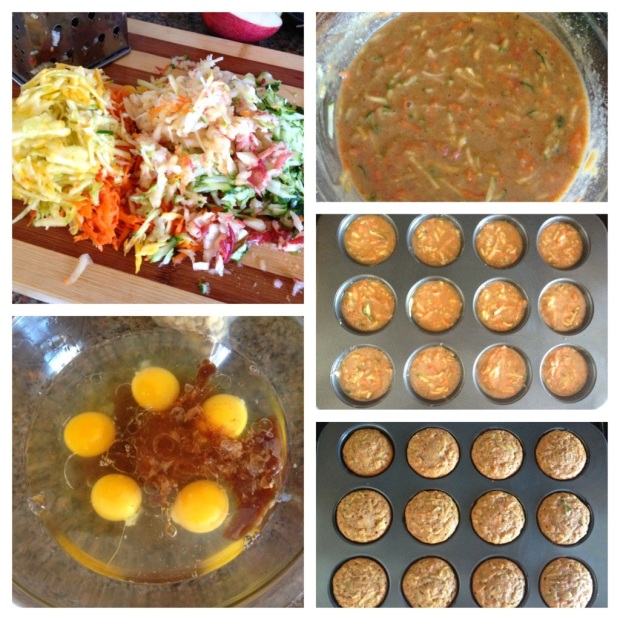