I hung out with this guy once who was a legitimate cook (like had culinary training, or whatever). And he said that with cooking you can kind of do whatever you want, but with baking there’s a science and you can’t really mess around in the same way.

Well, I don’t think it’s as rigid as all that, but I’m starting to see what he means…

For instance with these truffles. I started the same way as with the last ones – one part cream heated and poured over one part semi-sweet chocolate chips, mixed together to form a ganache and then left in the refrigerator FOREVER to harden – which it never did.

I thought maybe I needed more chocolate – that the ratio was off and that’s why it wasn’t hardening. Or maybe I should have used butter instead of cream because at least that’s solid at fridge temp?

But it turned out it wasn’t the ingredients, so much as the science! Apparently if you heat chocolate too quickly (like by pouring hot cream on it all at once) it separates the solids from the fats and it will never harden. Good to know!

To fix it, apparently you can just microwave it. I don’t have a microwave (my mother couldn’t believe it either), so I make-shifted a double boiler using a pirex and a small pot. Totally worked! Despite the fact that I’d forgotten I’d already added in some pine nuts and so couldn’t figure out why it wasn’t getting smooth…

Also, before I realized this whole science thing, I’d already added in a bunch of extra chocolate chips – I don’t know, some truffle recipes seem to call for 2:1 chips to cream, so I thought it would be fine. The result was kind of too chocolaty, though, if that’s even a thing. So next time I’ll just do 1:1 again.

This substance hardened nicely in the fridge, and I was able to make perfect little balls and roll them in crushed toasted pine nuts, cocoa, and rock sea salt.

The truffles didn’t stand up well to being thrown around in my bag all day, but under normal circumstances they do quite well! 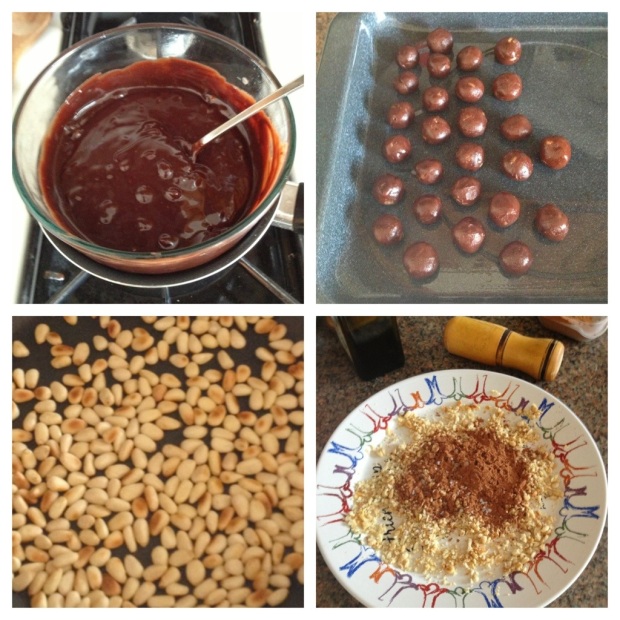