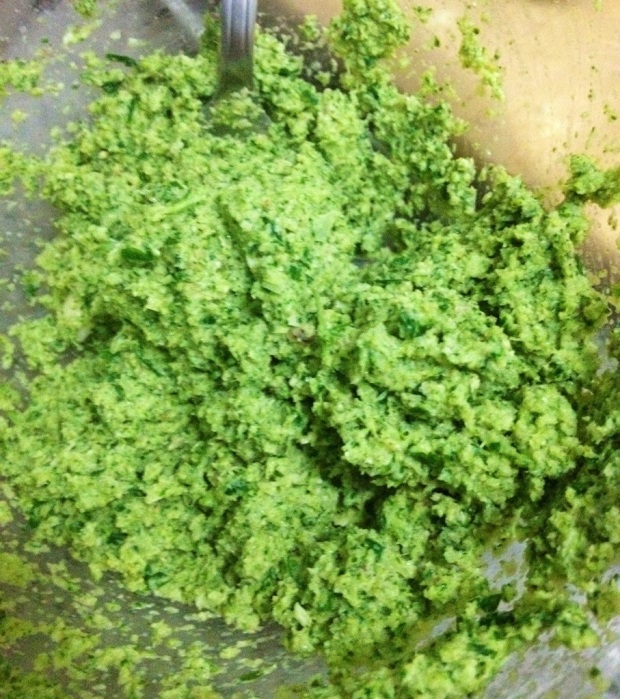 I’d heard you can make pesto out of pretty much anything, so I thought I’d try it with broccoli. I got the general idea for this recipe from Green Kitchen Stories and, sort of followed it…

Changes:
I didn’t use basil or sage (I didn’t have any and I’d seen other recipes that didn’t call for it)
I used walnuts instead of hazelnuts (again, that’s what I had and I’d seen it in other recipes)
I also added Pecorino Romano (non-vegan version)
And I steamed the broccoli – which, looking back at the recipe it didn’t say to do! But it worked out fine.

The recipe ended up being:
1 large broccoli (steamed, although apparently that’s not necessary – in which case you might have to add a little water)
1/2 lemon, juice
1/2 cup walnuts
2 cloves garlic
1/2 cup olive oil
salt & pepper
1/2 cup pecorino romano

I put it all in a bowl and used my immersion blender (soooo obsessed! – it’s visceral, small and easy to clean)

One thing I will say, which I should probably have learned a long time ago, is make sure you’re using fresh garlic if it’s gonna be raw!! That was the one flaw in this design.

Also a whole head of broccoli makes a lot of pesto! So be forewarned.

I ended up putting it on toast (gluten free Udi’s is amazing, if you’re into that) with sautéed cabbage, mushrooms, and onion, and some more pecorino romano. Super delicious!