I wanted to make brunch and I had an eggplant – a less-than-common combination, but that’s hardly a deterrent. I found this recipe from Taste of Home but decided to omit the bread-product base (and a few other minor changes). Here’s what I did:

Eggplant Base:
– Cut the eggplant into 1in slices
– Brush the slices with a mixture of grape seed oil, salt, and paprika (they said pepper, not paprika, and they didn’t specify the oil but I have grape seed and it’s good for high heat, so why not?)
– Broil the eggplant slices on each side for ~5 minutes

Poached Eggs:
First, an aside: Poached eggs have long been the justifier for going out to brunch because I just can’t make them. I’ve watched YouTube videos all about making a vortex in boiling water and dropping the egg into the center and whatnot, to no avail. I once went through 6 eggs before I finally put one in a tea strainer in the water, which kind of seemed to work.

All this to say I had sort of neglected to think about the poaching eggs part when I decided to make these. But luckily I had a tea strainer cup that came with my new tea pot, so opted for that method again. The other thing was that I was pretty much out of vinegar, which I guess helps keep the egg from spreading out too much? I had about a teaspoon of apple cider vinegar, and then I threw in some red wine vinegar for good measure – why not?

– Put some vinegar in water
– Heat the water til simmering
– Put your tea strainer or whathaveyou in the center if the simmering water
– Crack an egg into a little cup and ease it into the tea strainer
– Let it sit for ~4 min until the white is solid. (If you take it out a little too early you can put it back in)
– Carefully take out the tea strainer and remove the egg
– Rinse, repeat

Assembly:
– Put smoked salmon and avocado on top of the eggplant slices and put the poached eggs on those
– Put it all in the oven on low to keep warm while you make the….

Hollandaise Sauce:
– Into your double-boiler (or in my case a smaller pot resting awkwardly in a bigger pot):
— 3 egg yolks
— 1/4c water
— 2tbsp lemon juice
– Whisk it over simmering water until it thickens enough to coat a spoon
– Slowly pour in melted butter – they say 3/4c, we used 1/2c. We also forgot about the melted butter part and so it went in late, which I’m thinking is the reason that my sauce separated? It still tasted good, but that was a little disappointing.
– Also add in salt and pepper

– Pour the Hollandaise over the eggplant egg piles and serve!

So exciting, so delicious, never going out to brunch again! (ha) 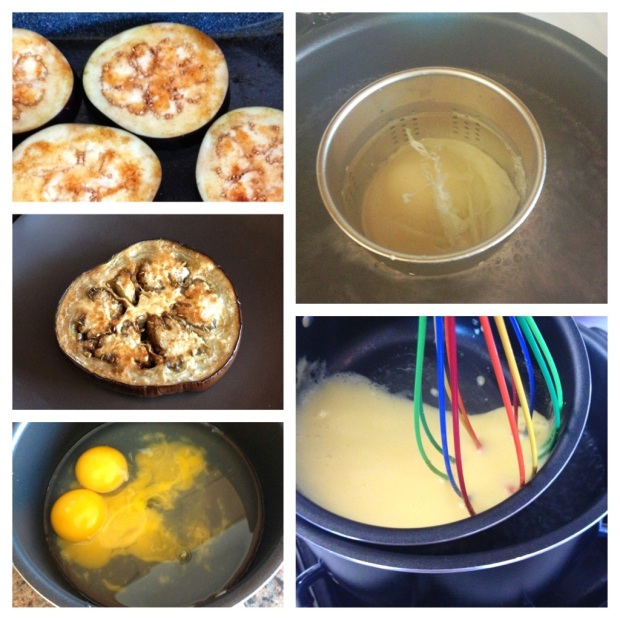