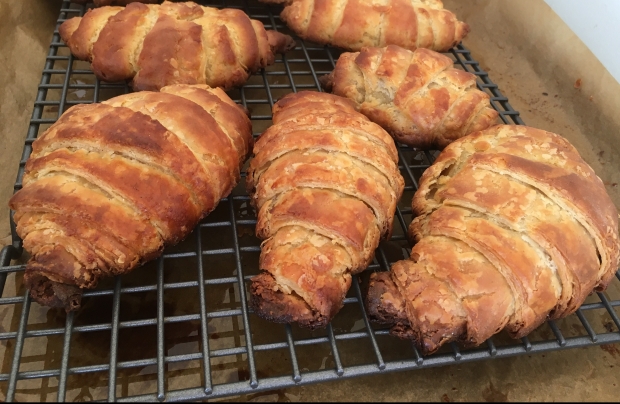 Not easy, but doable! Because this was pretty successful, and there were a number of things stacked against me:

Anyway, following this recipe from Better Batter perhaps a bit more closely than usual, we have arrived!

Here’s the journey and a few callouts along the way: 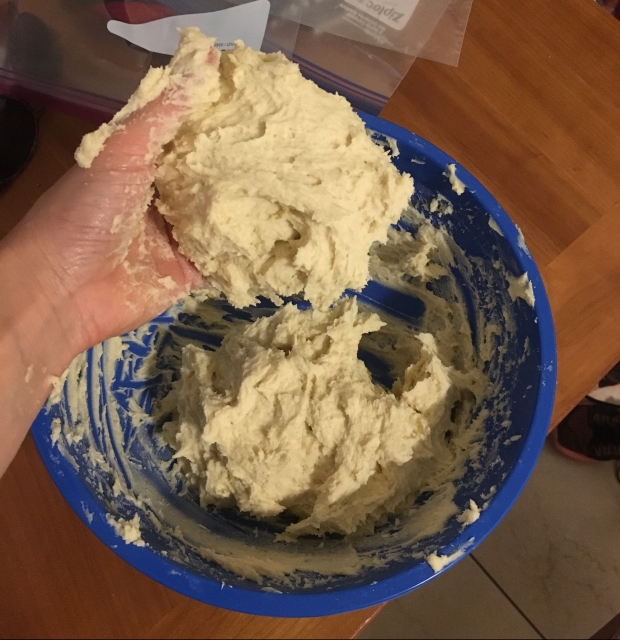 Step 1: Place 1pkt Yeast+1/4c warm water+1/4c sugar in a bowl. Let sit for 10 min in a warm place (like on top of a preheating oven for something totally unrelated to these croissants)

Step 2: Mix 2 sticks butter+3/4c sour cream+3/4c ricotta+1egg until it’s kind of like cottage cheese. Then mix in the yeast mixture.

Step 3: Add 2 1/2c gf flour+1tsp each: salt, baking soda, cream of tartar and mix “until the dough comes together… it will be sticky”

Step 4: Divide in half, place each half in a ziploc bag and shape into a ~4×6″ rectangle. Refrigerate 2hrs-overnight.

Step 5: Grate 2 sticks of frozen butter and refreeze them.

Step 6: Roll out one of the rectangles on heavily floured parchment paper to ~27×15″. Put 2tbsp of the frozen butter in the middle third, fold up the bottom and put another 2tbsp on top of it, and then fold down the top (so there are three layers with butter between each).

Step 7: Repeat step 6 – roll it out again, add butter in the middle and fold the bottom up, add butter on top of the fold and fold the top down. Make sure you’re using a lot of flour on top and underneath so that it doesn’t stick*

Step 8: Roll out and fold the same way but without butter

Step 9: Cut the dough into super long triangles, 4″ at one end, and then roll them from the wide end to the point. Use egg white to stick the point to the body, and then brush the whole top with egg white and place on parchment paper on a baking sheet.

Step 11: Repeat steps 6-8 with the second rectangle, but instead of just making croissants, try other fun things you’ve seen people do with puff pastry, like this video I’m obsessed with, because when are you ever going to make puff pastry again, and how cool are these?