This was the second course of my friends dinner, and it was pretty good except this definitely is a side dish and I didn’t put it on the side of anything, so it was a little bland – whereas the consensus was it could have been a good counter to a heavier, more flavorful meat dish or something. Also I tried to use crumbled Mary’s Gone Crackers instead of the bread crumbs, which is one of my favorite substitutions, but in this case we needed something a little crustier or crunchier, and actually were thinking that super crispy bacon would have been the best alternative, so keep that in mind! Here’s what we did:

– Chop up fennel and leeks and put them in a greased (we used butter) casserole dish with:
— Bone broth or some other stock
— White wine
— Fresh parsley
— Thyme (I only had dried – grocery store fails me again!)
— Salt
— Pepper
— Dots of butter

– Bake covered in tinfoil (forgot the tinfoil part until it started to burn a little – oops!) at 375*f for ~1hr (actually the recipe says 400, but the acorn squash soup said 350 so we split the difference)
– We added in crushed up crackers instead of bread crumbs and baked uncovered for another ~30 min. This didn’t work that well – the crackers got kind of soggy. And as I mentioned before, bacon would have been a better choice on so many levels! But it was ok, everyone still went back for seconds 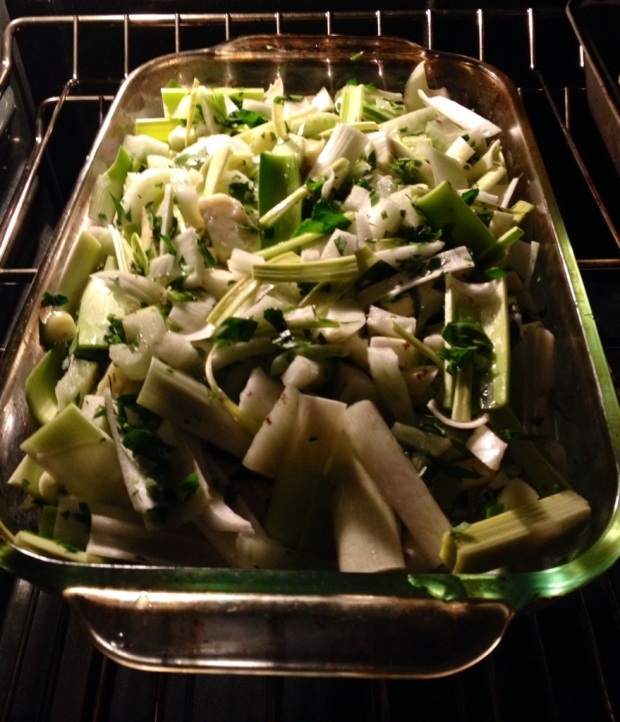 One thought on “Braised Fennel and Leeks”